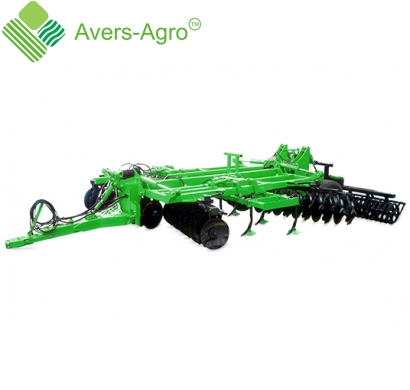 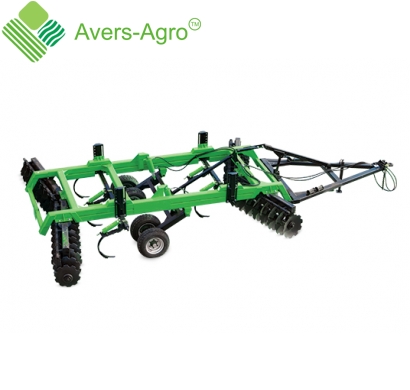 The most common soil cultivation tool in Ukraine is undoubtedly a harrow. But progress does not stand still and with the advent of new technologies and criteria for tillage , new units for cultivating the land come. Such an aggregate is certainly a disc- harrow harrow, which you can buy from the manufacturer of the company Avers-Agro. 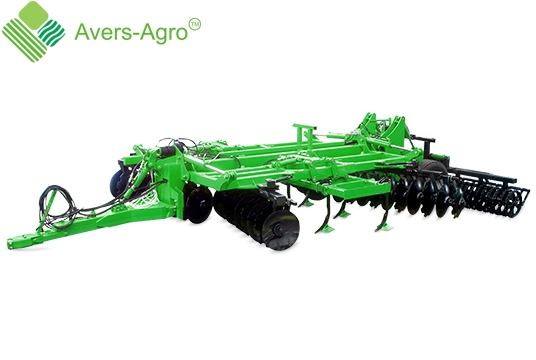 Such an aggregate is used mainly for pre-sowing soil preparation and essentially combines two devices - a disk harrow and a cultivator.

The principle of operation of the disc-foot harrow is very simple and at the same time complicated, since the unit performs several operations at once in one pass. Such an approach significantly reduces the cost of fuel, the tractor’s moto - clock and the tractor driver’s man-hours. And most importantly, the quality of the preparation of the field for sowing increases significantly.

The device of the disc-foot harrow can be schematically divided into 4 parts :

Now let us consider in detail why all these four sections are needed and what role they play.

The first battery of disks acts as a preliminary processing of the field. They work to a depth of 8 cm, thereby cutting the topsoil along with plant debris and mixes them with the soil.

The second row of paws works already at a greater depth (up to 40 cm) and they loosen the lower layers of the soil, get rid of more plant debris, and also increase moisture absorption and improve drainage.

The second row of discs finally mixes the soil with plant debris, improves mulch, levels the field and prepares for sowing. Such a structure of the earth provides an excellent background for the rapid decomposition of residues and saturation with beneficial microorganisms.

A number of heavy packer rollers compact the soil, break the breasts, thereby retaining moisture in the ground, and also help level the field.

Where and how you can buy diskolapov th harrow in Ukraine?

For over 10 years Avers-Agro company has been manufacturing and successfully commissioning disc-foot harrows throughout in such cities as the Dnieper, Kharkov, Kiev, Odessa and throughout Ukraine. Our equipment is also delivered to the near and far abroad. With subsequent assembly, commissioning and maintenance.

In order to order a disc-foot harrow, it is enough to place an application on our website or simply call the specified number. We will always be happy to cooperate with you!